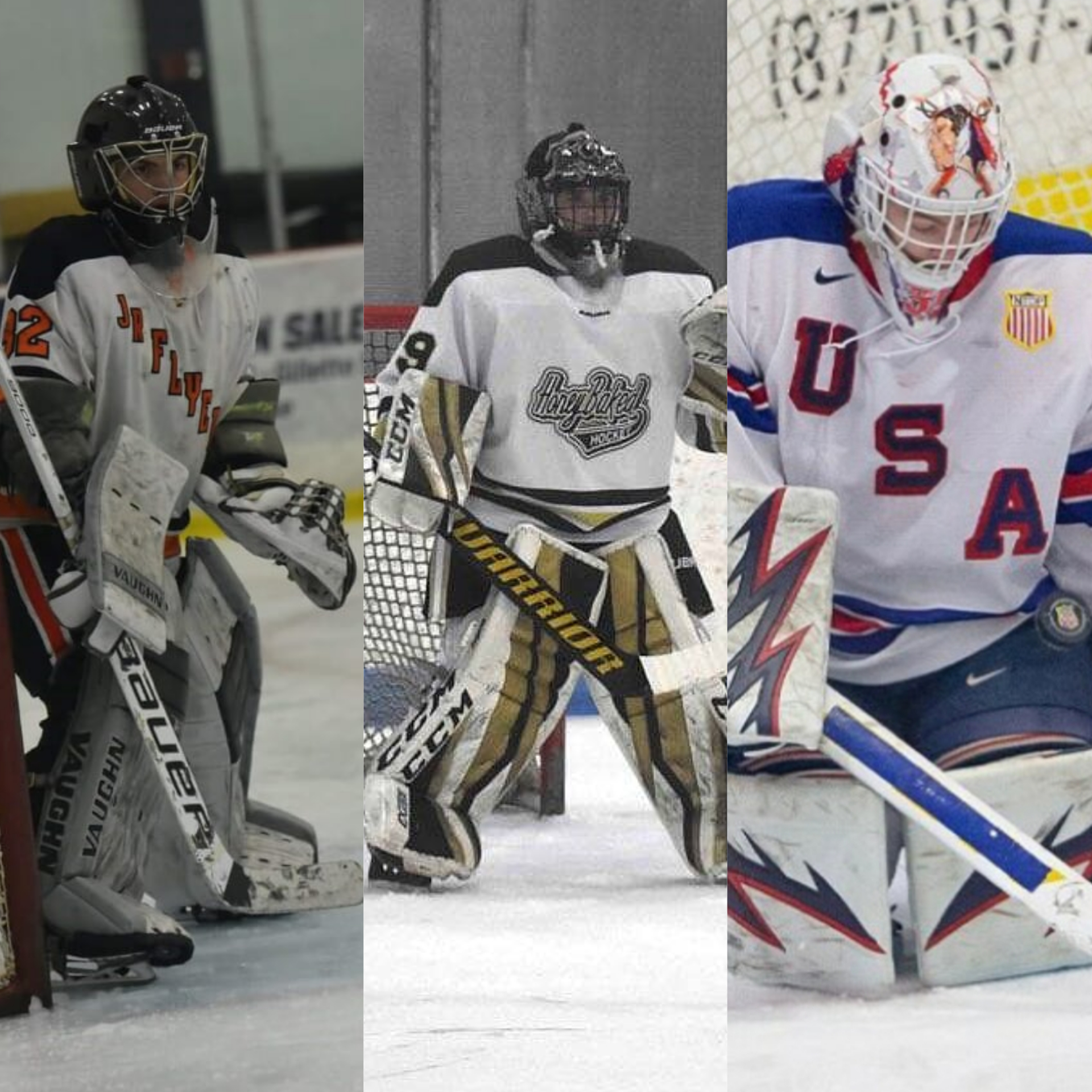 “Kevin has worked with our teams’ goalies for about 4 years now. He has been very accommodating to schedule into our practice ice time and also offer private lessons for the goalies to have more focus one on one time. Kevin does a terrific job engaging the goalies to work hard and focus on their weaknesses while also challenging them with new moves and concepts every practice. The players enjoy working with Kevin since he has a genuine love for the sport, a high level of enthusiasm for teaching, the ambition to motivate the players best efforts with an incredible positive attitude.

Kevin brings new drills to every practice that both reinforce the skills each individual goalie needs to reduce bad habits and advance the players capabilities. Kevin has advanced every one of our goalies to become top players at each level we have competed. I have worked with several goalie coaches over the 8 plus years of coaching and Kevin has been hands down the best goalie coach I have had the pleasure to work with. He is a pleasure to work with, brings a high level of skill and ambition to his coaching and is a terrific person all the way around.”

“I have known Kevin for 6 years and he has been my goalie coach the last 4 years for my 2006 Royal Oak Eagles travel team. I can without doubt say that he is one of the best coaches I have ever had the pleasure of working with. Not just as a goalie coach but as a coach, period. I have been involved with coaching hockey since 2004 and have coached at every level from house to AAA and Kevin is superb. He not only has an attention to detail that most do not but he also knows how to relate to the kids whether it be boys or girls. He has a way of getting his point across on what he is teaching in a positive way that makes the kids excited to come to practice. If every coach had his work ethic and great demeanor hockey would be better for it.”

“Kevin took my son, Nick, from a 1st year house goalie to a travel goalie in less than a season. In my son’s first season in travel, he had the best goals against in his division and was in the top 10 for all LCAHL 06 tier 2. More importantly, Kevin taught him confidence, good habits, work ethic, and mental toughness. My son went from enjoying the position to LOVING the position. Nick would not be where he is today without Kevin as his coach.”

“Working with KD Goaltending has had a major impact on our daughter’s technical skill level and ability. When she first started her 1:1 sessions with Coach Kevin, she could not make a top-level Tier 2 team. After just eight lessons, she made a nationally recognized Tier 1 team. She has continued to work with KD Goaltending at team practices, private sessions and clinics. Not only does she continue to build on her skills, but her confidence has also grown significantly. The staff is always professional, and tailors each session to our daughter’s specific needs. She is excited to continue working with Coach Kevin and his staff.”

“We have had the pleasure of having Kevin as our goalie coach for the past several years. Kevin does a great job assessing our goalies needs and providing meaningful feedback for their overall development. He’s an asset to our team and our girls program.”

“My son has had a great experience working with Kevin this season in both team and individual training. Kevin provides beneficial feedback to the goalie and parents after every session. He is very energetic and motivated to help the goalies get the most out of every practice. He provides continuous updates on dates/times he is available for outside lessons which is very helpful during the season. I would highly recommend Kevin for all levels of goalie training.”

“Kevin’s attention to detail and his ability to clearly communicate / demonstrate the technical aspects of becoming a better goaltender has undoubtedly improved our team’s goalie performance this season. Kevin also possesses the integrity, dependability and passion for improving his student’s abilities that we look for in any coach that works with our team.”

“Kevin has been working with my daughter since she was 10. She is now 14 and is playing at a very high level. Kevin’s ability to identify areas for improvement and create a customized plan for the individual goalie is fantastic. Kevin has also attended many of her team practices to work with the goalies and ensure the day to day coaching staff is on board with his goalie training plan. Like many of you reading this, we worked with many goalie coaches in the past. Once we found Kevin, we wouldn’t consider another coach. He has a unique ability to motivate and hold goalies accountable in a very positive way. I can’t say enough about Kevin and KD Goaltending.”

“Kevin has been working with my Bantam Minor “AAA” (05) Oakland Jr. Grizzlies team for this past/present season. The minor details he has focused on with our goaltenders has really shown a large difference over the last couple months in their performance. He has done a very nice job with them, and the fact that both goalies love working with him, also helps with their development because of the respect they have for him. This has led to them wanting to work that much harder when he is on the ice with them.”

“Kevin is an excellent goalie coach who is patient, knowledgeable and has a unique ability to motivate young goalies to work to their full potential. Kevin has worked with my son for over four years when he first started in a house league and is now playing on a competitive Yzerman team.”

“Over the years of our exposure to hockey we have seldom found a coach as dedicated and engaged as Kevin. He provides the same commitment to all his students – he respects them all and builds on the individual strengths/styles. He brings experience at nearly all levels with players from Mites to college and beyond – this not only insures that KD Goaltending provides unique experience. Kevin actively studies and brings cutting edge goaltending techniques and drills to build goalies at all levels. Goalies get fun but challenging training every time, building very sound fundamentals regardless of differing styles, body types or equipment (not 1 size fits all) in a thoughtful training regime (which often includes mind and body training for the advance goalies). One on one sessions are action packed and continuously advancing. The results are clear and I’ve seen his students stand out regularly.

KDG clinics are not another “goalie mill” focused on volume and money. Kevin and the KDG staff are focused on quality, respect and impact.  And the KDG clinics are sized to have a great ratio of coaches to goalies and this is unique and speaks volumes to Kevin’s philosophy and commitment to developing each and every player.”

“Kevin has been a constant factor in my development over the past eight years and what stands out is his adaptability. Not only adjusting to more goalies as his popularity grows but also practice to practice. No two hours, of what is likely hundreds of hours at this point, ever feels redundant or without purpose. There is always a distinct purpose to each practice and a tangible goal for you to reach by the end of the lesson. On top of that, the drills and practice plans change and grow with the goalie. Kevin has a great ability of assessing where a goalie stands skill-wise and is sure to give that student exactly what they need to make the next step and then the next step.

I’ve never seen a goalie work with Kevin and be in over their head, but at the same time they are pushed on each and every rep. The longer I work with him the more I’ve seen that he knows how to push goalies to limits, but also how to slow down and convey concepts unlike anyone else I’ve worked with. There are a lot of goalie coaches in metro Detroit, but not many coaches can say they have the personality and knowledge to focus in on a goaltender’s individual nuances and needs the way that Kevin Delamarter is capable of.”

“My first goalie session with Coach Delamarter was when I was 10, and I recently returned to train with Kevin at 15. I really like the personalization of his training sessions. When he recognizes a weakness in my game, he develops a set of drills to address my needs and quickly institutes those drills into my sessions. I like that he videos all my sessions so that we can review the film in real time during training, and then I can review the sessions on my own. I have been coached by high-school and college goalie instructors, as well as college goalies themselves and Coach Delamarter’s skills as both a goalie and an instructor are second-to-none. I highly recommend Coach Kevin to any goalie just taking their first steps into the net as well as older goalies wanting to grow their game to the next level.”